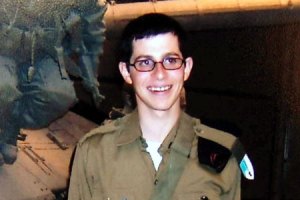 Sometimes I read the news and remember that my life, in the States, is amazing. Our problems are so frivolous compared to the things we hear or see in other nations, especially those dealing with serious levels of poverty, disease, famine, constant war, and so many other issues that comprise their entire lives. They cannot afford the freedoms we have. We often make a big deal about choices we have to make, like what grad school to attend, or what career to pursue. They have no choices. We are spoiled, and too often ignorant. I wish I could do more than just know about the problems, but I can’t, at least not yet. But I can write about some/any social injustice, and if one person reads it, I’ve at least done something to help.

Gilad Shalit is a family man (more so a kid), born and raised in Israel. He began military service for his country at the age of 18, in the Israel Defense Forces, and despite some medical issues, preferred to be a part of the combat unit. One year after joining, Shalit was captured by the Palestinian Hamas group on the Israeli side of the Southern Gaza strip at the Kerem Shalom border. He was 19 then. He is now 23 years old — still a captive of the Hamas.

Israel’s government, along with many other groups including Shalit’s family, has brought a great deal of attention and media to the situation. Shalit’s release has been a focal point as of late; yet, the Hamas can counter by bringing up the Flotilla Raid of the Gaza Freedom Flotilla during which many Palestinian groups challenged the Israeli blockage at the Gaza strip, the same bloackage that Shalit was helping to enforce before being captured. The Hamas could even bring up the Israeli hold of over 1.5 million people at the Gaza strip, half of which are children. These 1.5 million have received no push to be freed because there is no name attached to them, no face on the media.

So, if the Israeli government is calling for the release of Gilad Shalit, then what about the 1.5 million captives that Israeli forces are holding? There is a basic morality that is being overlooked in the discussion of these imprisoned individuals.

The International Committee of the Red Cross (ICRC) has been prevented from visiting Shalit, and he has not been allowed to talk to his family. Yet, Hamas is required to do all it can to protect the life of Shalit, who is considered a Prisoner of War by the ICRC and international law. With the worldwide recognition of this situation, the Hamas will be sure to maintain Shalit’s health, as they do not hope to damage their image. But what about his life? His freedom?

The Isreali government has done little to ensure Shalit’s safe release, as many attempts at a prisoner exchange have failed. Sahlit’s family has been extremely involved as of late, and I truly feel sorry for them.

Israel seems to be using Shalit as a propaganda tool, in an attempt to make them look like the good guys. Hamas benefits from holding Shalit, as his value is internationally prevalent. Hamas has deflected the criticism by bringing up the 1.5 million who are held captive by Israeli forces at the Gaza strip.

Sounds like a blame-game. Meanwhile, lives are being wasted. I just hope international authorities can do more than simply pass resolutions that encourage the fair treatment of these captives.